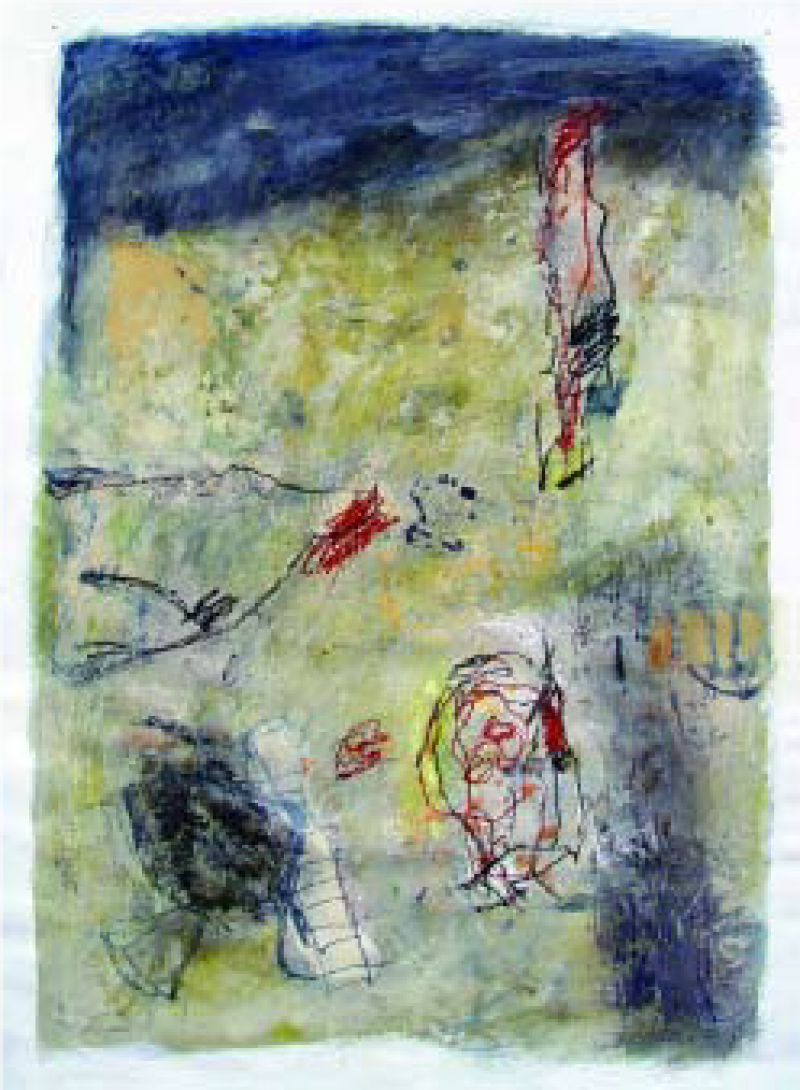 In Edward Bisone’s commanding and poignant work, the paintings take on a life of their own, flowing in opaque and translucent washes of brown, white, red, and yellow. The end result is a shroud through which organically-derived shapes such as flowers, human faces, and amoeba– like characters come to life. These images float across the surface of the paper, at times pushed by brilliant fields of color, drawing the viewer into the picture. The use of abstract forms in these compositions owes much to the Surrealist language of Wassily Kandinsky, Joan Miro, Max Ernst, and André Masson. Edward Bisone is also greatly influenced by the Post impressionists and Abstract Expressionists, identifying, in particular, with the work of Paul Cézanne and Richard Diebenkorn. Bisone’s aversion to precision and mechanical aesthetics becomes apparent in his colored shapes and lines, arranged in vibrant, biomorphic  compositions. The shapes suggest drama and movement. The intense, vivid colors create a sense of space, while the lines give the works an energy and visual tempo.

Bisone’s work is a lyrical, symbolic reflection of his life journey. He describes his work as “a cerebral exploration of pictorial space.” Adamantly disconnecting his present artwork from commentary on the values of the current zeitgeist, he concerns himself more with the “holistic spirituality of the metamorphosis and fragility time plays on life.” In his words, the creation of artwork is “a result of a necessity to create—plain and simple.” Bisone works on approximately ten pieces simultaneously. Through strong sales and a committed regional collector base, Bisone never keeps a large inventory. Once a work leaves the “coop,” as Bisone calls it, he is relieved of the responsibility for its development, akin to an offspring leaving the nest.

In the last decade, Bisone has developed an interest in spirituality, reflecting his idea that “art is influenced by something unexplainable. The more scientists and mathematicians discover, the more questions that arise—for example, the mystery of creation.” Once in the home of one of his patrons, the work takes on its own life force. When he finds himself in that home and looking intently at the work he created, Bisone is always enlightened and surprised at its evolution.

In the end, Bisone finds that “the picture does all the work. Each artwork is a pause in time—a snap shot in the journey of life.” He refers often to one of his favorite motivational quotes from Marcel Duchamp: “Artists rarely know what they are doing.” Bisone follows this mantra to explore and experiment with a freedom and confidence not many artists achieve in a lifetime.

“The initial working of a piece is very often automatic. As the work progresses, more conscious attempts to externalize a feeling or an idea intrude.” - Edward G. Bisone, September 2005