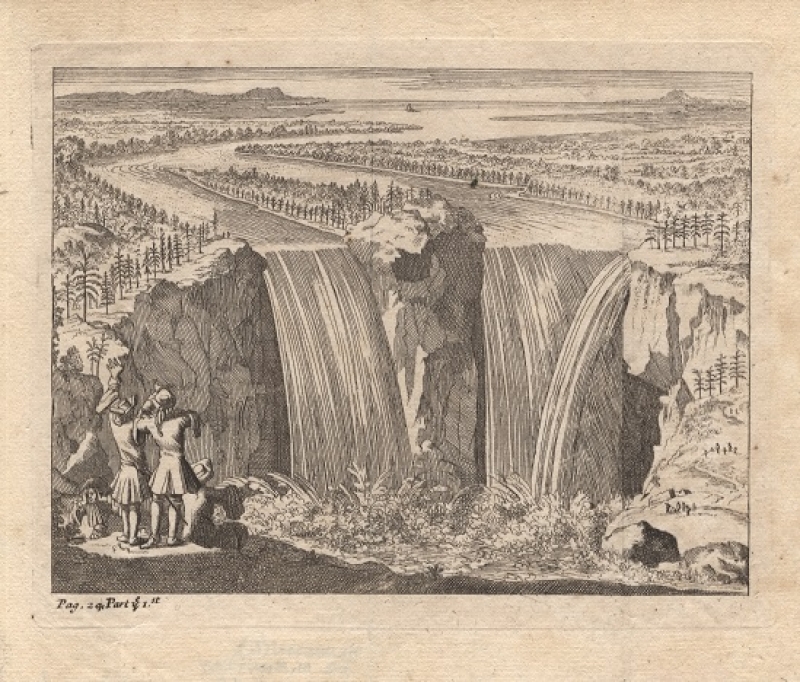 The earliest known depiction of Niagara Falls is this print by an unidentified Dutch printmaker for the publication of Louis Hennepin’s travelogue. Based on the Franciscan friar’s description of the area’s geography, the image is not completely accurate. It does succeed in showing the extent of the expansive landscape containing the Niagara River and its two enormous falls, and provided Europeans with a glimpse of the natural wonders of the New World. Numerous representations by other artists were produced over the years based on this early image.

This etching, based on Father Hennepin’s original diary entry, was first published in Description de la Louisiane in 1683. It was later translated into English in 1698 as A New Discovery of a Vast Country in America.

“Betwixt the Lake Ontario and Erie, there is a vast and prodigious Cadence of Water which falls down after a surprizing and astonishing manner, insomuch that the Universe does not afford it's parallel. Tis true, Italy and Suedland boast some such Things; but we may well say they are but soory Patterns, when compar'd to this of which we now speak. At the foot of this horrible Precipice, we meet with the River Niagara, which is not above a quarter of a League broad, but is wonderfully deep in some places. It is so rapid above this Descent, that it violently hurries down the wild Beasts while endeavouring to pass it to feed on the other side, they not being able to withstand the force of its Current, which inevitably casts them above Six hundred foot high. . . .

The Waters which fall from this horrible Precipice, do foam and boyl after the most hideous manner imaginable, making an outrageous Noise, more terrible than that of Thunder; for when the Wind blows out of the South, their dismal roaring may be heard more than Fifteen Leagues off. . . .

The River Niagara having thrown itself down this incredible Precipice, continues its impetuous course for two Leagues together … with an inexpressible rapidity: But having past that, its impetuosity relents, gliding along more gently for two other Leagues, till it arrive at Lake Frontenac [Lake Ontario].”