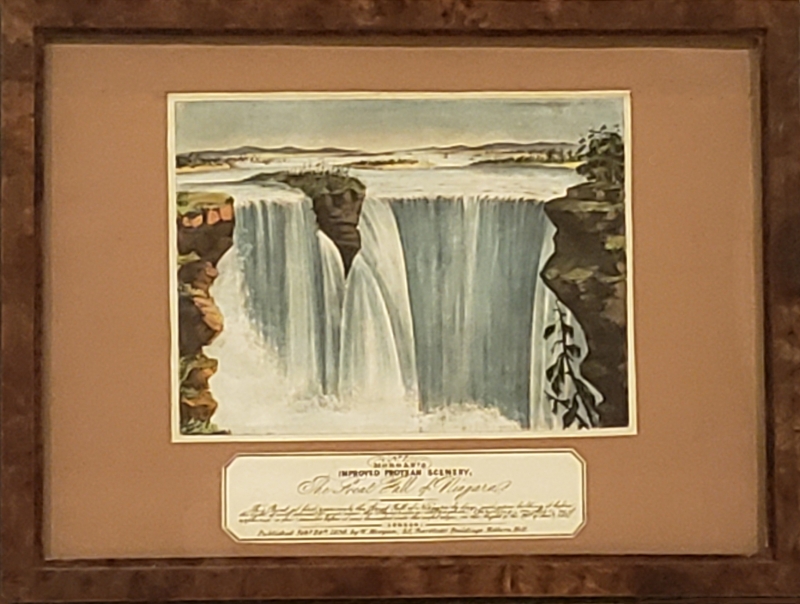 This is a rare example of a “transparent” print. Parts of the print were made to be translucent, and  different colored paper was placed behind, so that a strong light from the rear would allow the color to  show through on the front. This print documents an event in the Mackenzie Rebellion of 1837-38, a  short-lived rebellion against the British government in Canada, led by William Lyon Mackenzie. On the  night of December 29, 1837, British soldiers rowed across the Niagara River and captured the rebel’s  supply ship, the Caroline, setting it on fire and sending it toward the cataract.

Although this print  depicts the Caroline about to plunge over the brink, the ship was in fact grounded by the rapids and did  not go over the Falls.

No. 7/ MORGAN'S/ IMPROVED PROTEAN SCENERY,/ The Great Fall of Niagara./ This Print at first represents the Great Fall of Niagara by day; and, upon holding it before/ the light, it will present to your view the American Steamer, Caroline, on fire, as it/ appeared a few seconds before it was launched into the awful abyss, on the Night of the 29th. of Decr., 1837./ LONDON:/Published Feby. 24th., 1838, by W. Morgan, 25, Bartlett's Building, Holborn Hill.