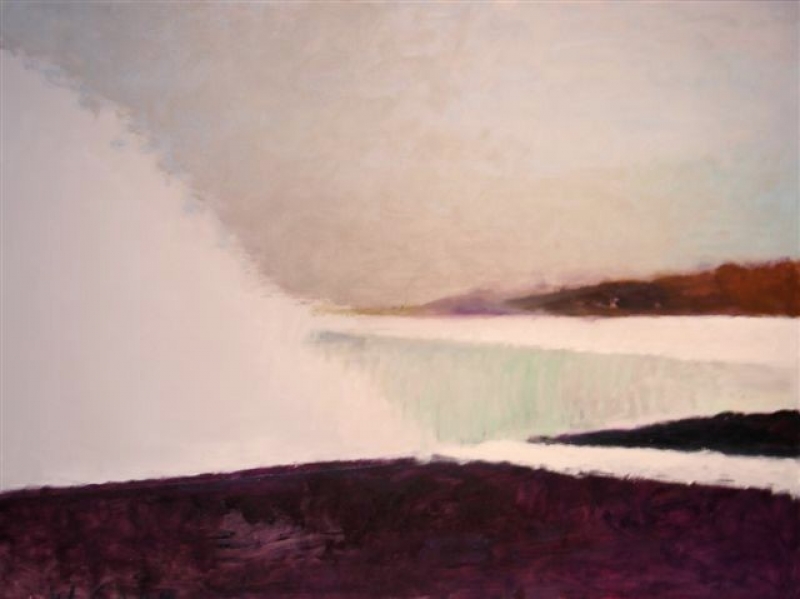 Wolf Kahn, Mist of the Falls, 2006, oil on canvas, Castellani Art Museum of Niagara University Collection, Gift of the Artist, 2006

Imagine coming upon Niagara Falls for the very first time in 1678, as Father Louis Hennepin did. There were no paved paths or fences, bridges or observation towers to separate Hennepin from his experience of what he described as “a thundering cataract which has no equal.” With the help of Native American guides, Hennepin was the first European known to have seen the falls. His vivid written descriptions were later translated by an unknown artist into the first visual image of the falls—a print included in Hennepin’s 1697 book, A New Discovery of a Vast Country in America.

Widely circulated throughout Europe, the image inspired other artists to create their own representations of the falls. Prior to the 1800s, people visited Niagara Falls mainly through printed images and their imaginations as the Niagara Region was sparsely populated and travel was difficult. As the 19th century progressed, images of the falls increasingly enticed people to see them in person. Wealthy travelers participated in what became known as the “American Grand Tour”—a trip by horse-drawn coach from New York City, up the Hudson River Valley to Saratoga Springs, and then westward to Niagara.

Following the War of 1812, a variety of businesses were established in Niagara Falls, New York. The population grew, roads improved and travel became less expensive. By the late 1820s, many people were earning a living by providing lodging and other amenities for the 12,000 to 15,000 tourists who visited annually. Among those who viewed Niagara Falls during the 19th century were some of the best known visual artists of the time.

Artists continue to visit and produce their own creative expressions of Niagara Falls to this day. They have worked in every media including drawing, print, painting, watercolor, photography and beyond.

The diverse artworks included in Artists View the Falls: 300 Years of Niagara Falls Imagery ranged from the first known print of the falls, made in 1698, to Scott Bye’s 2014 work titled Protos, an amalgamated sculpture created by Bye from a wine barrel, steel bar stools, stretch wrap and LED electrical elements and commissioned by the 2015 Barrel Through Niagara project.