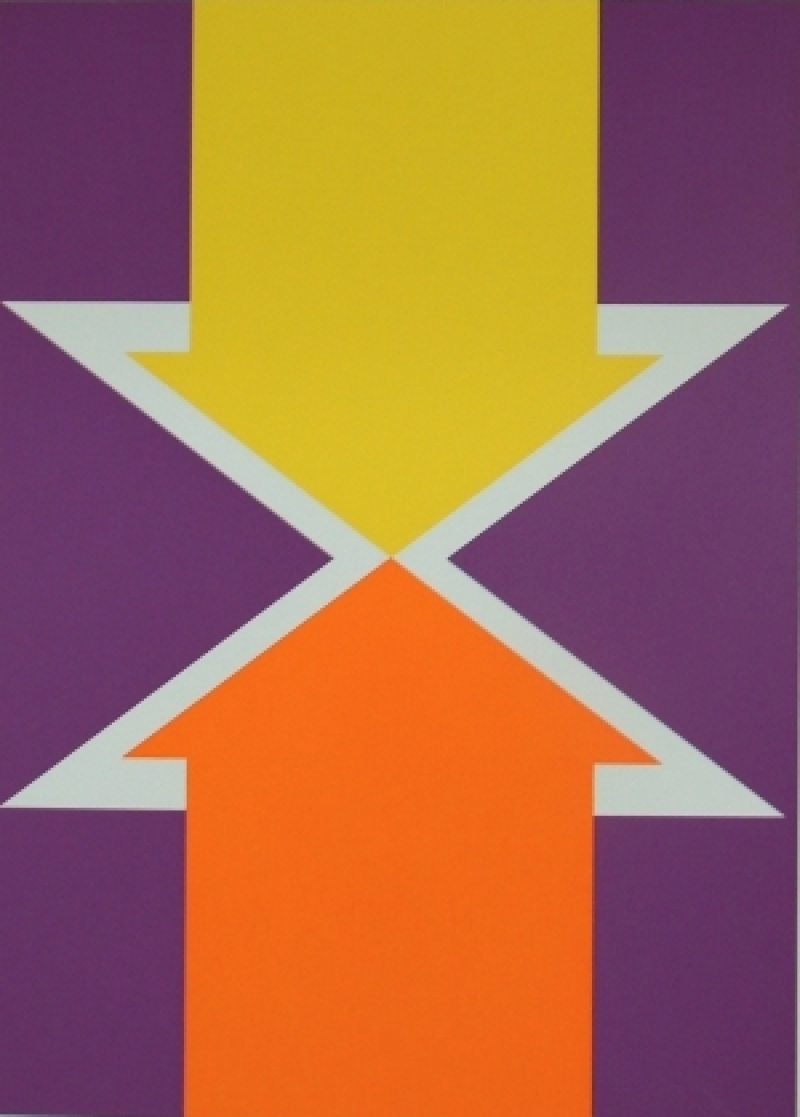 Betty Gold’s sculptures grace public and private spaces all over the world. Her creative works include a diverse range of media; this exhibition features a selection of her geometric serigraphs. These works are from three portfolios produced in California in the early 1970s “Arrows,” “Holistic Images” and “Surprise Packages.” Also featured is the recently acquired welded steel mono-chromed sculpture Majestad II (2004-2005), a promised gift of Mr. and Mrs. David Chatkin, of Turtle Creek, PA. This vivid blue work provides a stunning outdoor focal point for the north-west corner of the museum entrance.

Gold’s use of brilliant color and strong directional shapes are signatures of the work that has earned her a place among the world’s most reputable artists. The serigraphs featured in this exhibition accentuate the bold, graphic style that Gold is known for and they reflect her interest in form, motion and space. She is a strident believer in the geometric concept and says, “It never becomes tiresome, as I continue to find new ways in which to express its truth and universality. Every new project is like the first—challenging, fulfilling and exciting.”

Dividing her time between Venice, California and Palma de Mallorca, Spain; Gold has traveled extensively, studying and lecturing around the world. Her work has been collected and widely exhibited at museums and galleries across the United States, Europe, South America and Asia.

Gold was born in 1935 in Austin, Texas, and attended the University of Texas at Austin. Pursuing a major in elementary education and a minor in art history, after graduating she apprenticed with sculptor Octavio Medillan in Dallas, Texas. Medillan (1907-1999) was a renowned sculptor, educator and founder of the Medellin School of Sculpture in Mendocino, California where he taught students in a variety of sculptural media.

Gold was honored with a major retrospective exhibition at the Casal Solleric Museum in Palma, Spain. Betty Gold—35 Years of Sculpture filled ten rooms of the historic castle. Her exhibition in 2005 was followed with shows featuring the work of Columbian artist Fernando Botero (b. 1932) and Mexican painter Frida Kahlo de Rivera (1907 -1954).

Recent international exhibitions were also mounted at the United States Embassy Invitational in Merida, Mexico; the Biennale in Vancouver, British Columbia, Canada; and three exhibitions in California at the University of California Art Museum, Santa Barbara, The Buschlenmowatt Gallery, Palm Desert, and The Santa Barbara Museum of Art.