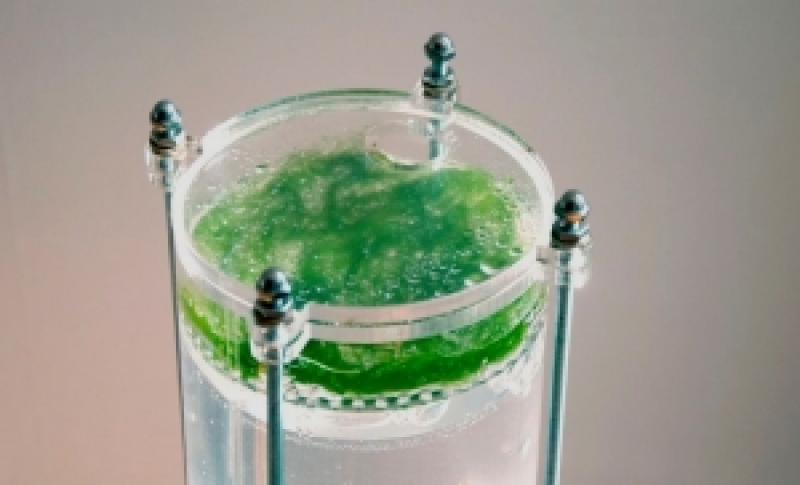 The Castellani Art Museum of Niagara University presented an exhibition of his work, opening with a reception on Sunday, August 3, 2014 from 2:00 – 4:00 p.m. and running through February 8, 2015.

Protista Imperialis v2.1 is the second iteration of a series begun in 2011. The work conflates digital space and physical space fostering a discussion of what is “reality” and the moral implications of participating in the unsustainable practice that is contemporary life. The piece acknowledges the physical and digital divide by integrating digitized interaction with biological processes. Two distinct realities are merged and moral questions arise as viewers determine the value of maintaining the digital and physical microcosms.

A computer system monitors Instagram in real time parsing every image with the hashtag #climatechange. With every use of this hashtag the boundaries of the contents incrementally give way to the surrounding digital ocean, questioning whether the proliferation of environmental sentiment is merely an empty gesture or the underpinning of deeper societal understanding of the threat posed by climate change.

The color of the digital continents and undertones of the digital ocean are provided via a live webcam feed of the algal bloom within the bioreactor, metaphorically merging the physical and digital microcosms. Viewers can interact with the destruction of the digitized planet by uploading images from the gallery using the hashtag #climatechange. The act of taking a selfie or broadcasting the viewer’s activities via Instagram negatively affects the digitized planet. Additionally they become part of the microcosmic digital world by being captured by the webcam as they observe the work.

While observing Protista Imperialis, the viewer’s interaction is monitored through a series of microphones and is digitized. The digital signal is translated into a light source providing nourishment for the algae in the bioreactor. With the presence of the viewer (as determined by the computer through conversation and observed sounds such as footsteps), an LED array below the bioreactor is triggered. Without the presence of the viewer the algae is not provided with a necessary light source.

Ultimately this work has been designed to encourage dialogue surrounding the implications of increasingly digitized interpersonal interactions, and whether further digitization of experience is, or can be an agent of positive environmental awareness. In Cosmos, Carl Sagan said, “It is all a matter of time scale. An event that would be unthinkable in a hundred years may be inevitable in a hundred million.” Thirty pages later he continues, “Do we value short-term advantages above the welfare of the Earth? Or will we think on longer time scales, with concern for our children and our grandchildren, to understand and protect the complex life-support systems of our planet? The Earth is a tiny and fragile world. It needs to be cherished.” The aim of Protista Imperialis v2.1 is to have those who see it question their sense of scale, time, and the profound interconnectivity between the constituents of physical reality and digital world.

Byron Rich was born in the city of Calgary, Alberta, Canada, on the eastern edge of the Rocky Mountains located in Western Canada.  After graduation from the University of Calgary with a Bachelor of Fine Arts in New Media and Photography, he spent time working at TRUCK Contemporary Art in Calgary, then traveling before beginning his studies towards a Master's of Fine Art in Emerging Practices at The State University of New York at Buffalo. Rich is currently Assistant Professor of Digital Art & Painting at Allegheny College in Meadville, PA.