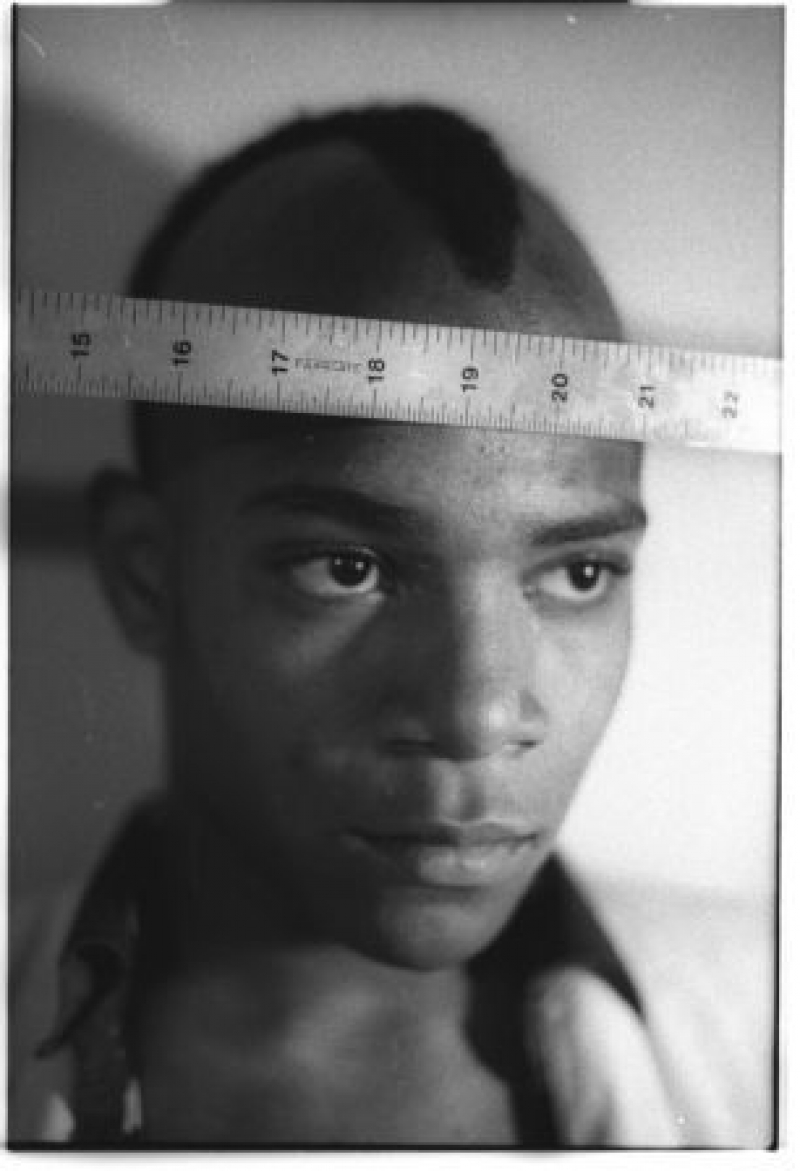 The Stare Jean-Michel Basquiat Neg. #18, 1979/2003 Jean-Michel had this pretentious look he would give people. Michael Holman and I called it “The Stare.” Jean-Michel was a man of incredible talent and genius, and to deal with mundane everyday things was just not in his program. He was oblivious to many simple tasks that ordinary people do almost unconsciously. If you asked him a simple question like "What's the weather going to be like today?” he would idly stare into your eyes with this intense, almost expressionless look on his face. Caught in deep concentration, Jean-Michel would stare at you and, without speaking, let you know how meaningless—almost foolish—your question was to him. In this photograph, my camera captured "The Stare."

The photographs in this exhibition reveal an intimate look at the friendship between artists Nicholas Taylor and Jean-Michel Basquiat, a camaraderie that was born under the pulsating lights of New York’s famed Mudd Club in lower Manhattan in January 1979. The Mudd Club was a beehive of creativity, where the likes of Fab Five Freddy, David Byrne (Talking Heads), Keith Haring, and Madonna frequented before they became famous. These historic photographs, shot on just one role of film, are being exhibited and traveled for the first time in their entirety. These images are portals into the life of an artist who was on the threshold of taking the art world by storm. Countless essays and reviews have been written about Basquiat and his work. This exhibition focuses on the portrait of a man, an artist, and, most importantly, a friend. Taylor’s and Basquiat’s friendship endured many years, through the ups and downs of Basquiat’s rise to notoriety in the art world until his untimely death in 1988.

These striking images, taken by Taylor, of a nineteen year-old Jean-Michel Basquiat, unspoiled by the artstar celebrity that was to reveal itself in just a few short years. The accompanying text panels, written by Taylor, document the friendship the two shared and also serve to contextualize the historical significance of Basquiat in the early 1980s. Taylor’s personal revelations and memories are shared with great candor.

Looking back on these images, twenty years later, there is a subtle aura of predetermination for Basquiat. His actions and poses, captured by Taylor, appear aloof or casual upon first glance. These are, in fact, rarely publicized visual records of Basquiat’s character and use of body language to express his emotions and personality, which, in turn, reflect his serendipitous struggle for fame and respect. Basquiat struggled for fame, fortune, and, most importantly, inclusion into the very closed society that was the self-serving art world of the early 1980s.

Basquiat painted as he lived – full throttle – everything, all the time. He had little sense of self-control, nor did he seek out any realm of moderation. In retrospect, his paintings are aggressive and fragmented, radiating nervous energy and enthusiasm for the chaotic world of which he was a part. Existing simultaneously in his work is a sense of excitement, imagination, and exploration of visual language. His frustration in trying to assert himself as a black artist into a predominantly white art culture was continuously filtered into the context of his work. Readily juxtaposing images of modern and primitive icons and text, he illustrated how he directly experienced the white bourgeois class identification with commercial black culture.

His volatile relationship with the commercial art world was symbiotic; each required the other to survive. Although there is much documentation on the overtly aggressive nature of the commercial art world, Basquiat appeared to give as good as he got. His ambition and eccentric behavior, coupled only with an obsessive hunger for fame, recognition, and, most of all, hunger for respect, thrust him into the vacuous world of New York in the early 1980s, where there was little hope of escape – let alone, survival.

Ultimately, this exhibition was an exploration of Jean-Michel Basquiat as the person who became one of the most prolific artists of our century.

"I first saw Jean Michel Basquiat's work in a very large group show, curated by Diego Cortez, at P.S. 1 in Queens, New York City, in 1981. If I remember well, there were three rather small paintings on canvas by Basquiat, with childish drawings depicting the theme of the streets of New York City. The personal touch of those works convinced me immediately of their originality, and, later, I called the artist on the phone and arranged to see his works.

The first visit was very exciting, and, consequently, I asked him to participate in a group show called Public Address, organized at my gallery. Since Jean-Michel did not have a place to work and wanted to produce very large paintings, I allowed him to work in a storage area of the gallery that was below the exhibition space. It was an area in a large basement that had a huge skylight in the back. In the next few months, Jean-Michel produced a number of masterpieces that brought him to the attention of the entire art world."