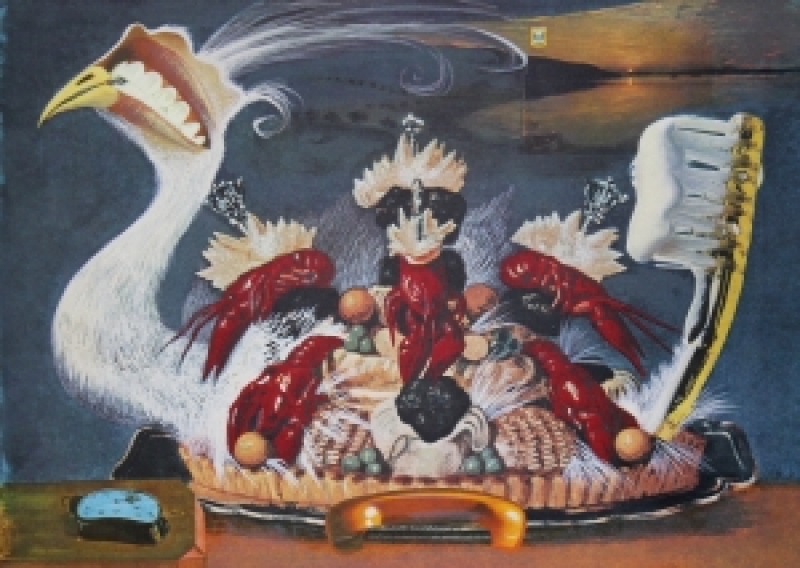 Les Diners de Gala (Gala’s Dinners) was published in 1973 and instantly became a Salvador Dalí collectable. This unique cookbook was published as a collaboration between Dalí and a secret chef. The “secret chef” turned out to be chefs from the top French restaurants of the day–including Lasserre, La Tour d’Argent, Maxim’s and Le Buffet de la Gare de Lyon. These chefs created the book’s recipes, and Dalí, of course, took the glory. Their goal was to produce magnificent meals fit for a royal feast.

Dalí was not only a brilliant artist, but also had a self-proclaimed refined taste for food and wine. Dalí’s introduction to the book states that since he was a little boy he wanted to be a master-chef. With a lifelong interest in the culinary and gastronomical arts, Dalí was known to have experimented with various foodstuffs as aphrodisiacs–much like Giovanni Casanova (1725-1798) the Italian bon vivant with a notoriously keen taste for pleasure and extravagant
foods. Dalí would eat and interact with various foods that he believed kept him in good health. He was famously rumored to have bathed in sardine oil and to have taken afternoon naps with live lobsters in his bed. At the age of 68, as a well-established artist, Dalí created this book about his life-long gastronomic adventures.

Dalí conceived and produced Les Diners de Gala as a dedication to his wife Gala, who is stylized on the golden cover. With 136 recipes in twelve chapters, this collection of eccentric formulas includes an entire chapter on aphrodisiacs, the correct use of atteletes (meat jewelry) and sketches of limbless dwarves eating eggs. Fifty-five feature recipes are illustrated in color. Dalí opens with a Dante-esque warning, “Les Diners de Gala is uniquely devoted to the pleasures of taste. Do not look for dietetic formulas here.”

“One can choose not to eat, one cannot accept to eat poorly.” – Salvador Dalí

In the humorous article “Dali’s Cookbook: A Gastronomical Inquisition,” Brad Richason wrote “Dalí adds to the adventure of the book with some linguistic looseness–fictitious Dalinian words like ‘hors-texte’ and ‘gastro esthetics.’ In explaining his ‘gastro esthetics,’ the artist noted, ‘In fact I only like to eat what has a clear intelligible form. If I hate that detestable degrading vegetable called spinach, it is because it is shapeless, like Liberty’.”

Richason continued, “Informed by Dalí’s distinctive style, the tome presents a heady blend of hallucinatory illustrations set against surprisingly appetizing recipes. Les Diners de Gala was a tour d’force of book publishing. Long out of print, the volume is a coveted collector’s item because of the outlandish recipes that capture the flavor of Dalí and Gala’s unlimited imagination, dining preferences and the extraordinarily lavish way Dalí illustrated this most exceptional of cookbooks. The flamboyant book is a veritable stroke of genius–its gold cover emblematic of how practically everything Dalí touched turned to gold.”

In conjunction with the release of the book Dalí also produced a twelve lithograph suite titled Les Diners De Gala (printed in 1971). This portfolio, complete with a distinctive engraving in the lower margin of each work titled Spoon with Crutches, is a Surrealist twist on some of Dalí’s favorite meals. These lithographs are the outcome of Dalí’s experimentation with mixed
media and are regarded as his most unique prints. With an edition size of 590 and 50 artist proofs, the portfolio on exhibition is AP (artist proof) 37 of 50.

Paul Chimera, Dali historian and Dali Museum founder notes that “Food was a favorite theme in much of Dalí’s work, his paintings, prints and other works are filled with images of bread, fish, lobsters, sea urchins, grapes, meats and more. It was therefore perfectly logical and perhaps long overdue that Dalí should produce a book and a print suite dedicated expressly
to gastronomy–a colorful world in which Dalí’s creative genius was cooked to perfection.”