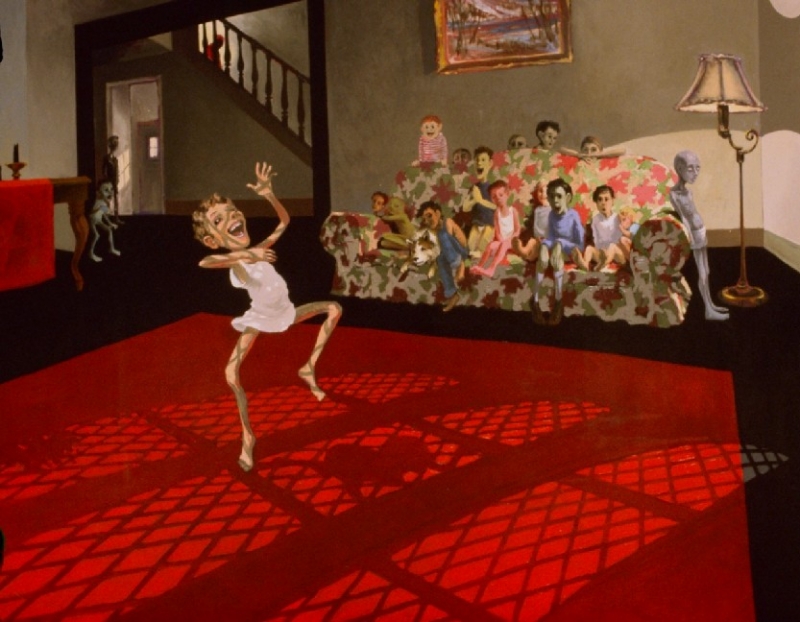 The human eye devours, seeking satisfaction for a hungry sensibility. We relish color, texture, contrasts, and illusions – the very stuff of animation, as I so well know. And the human spirit relishes nothing so much as the human experience dished up in provocative forum.  Michelangelo’s Sistine Chapel; Chuck Jones’ Coyote and Roadrunner. It’s a picture show. Its what I do.

In this statement, Jonathan Rogers invokes the fertile dichotomies that characterize his paintings. Comic and grotesque, benevolent and sinister, his childlike figures enact a mysterious drama – one that owes as much to medieval morality plays such as Everyman as it does to the classic cartoon shorts of Warner Brothers. Indeed, Rogers’ cartoonish imagery in the service of the spiritual reminds us of the lurid, didactic imagery of many a medieval illumination or cathedral portal. Yet, these disparate referents are not so much overt elements in Rogers’ work as they are background – antecedents in the compelling slippage of a multi-faceted imagination.

By his own observation, the formative pathways in Rogers’ personal philosophy– and, by extension, his artwork– are daunting to map-out. His biography includes an upbringing of “mystic religiosity” and ritualistic abuse, Kerouac-esque world travels, and prominent, innovative work in television and film animation. The barometer of his career has fluctuated wildly, from Hollywood player to homelessness on the streets of Los Angeles. The rewards and traumas of this amazing biographical journey have been many and great, but they refuse to form any logical, linear iconography for Rogers’ artwork. But to the extent that he may be seen as a twenty-first century Everyman, Rogers – like his medieval counterpart – has felt the frisson of being pulled between heaven and hell. He has found himself in a position of contemplating pure potential – for good or ill – and been challenged to translate such potential into visual form.

According to Rogers, "Most of my serious painting is to a degree allegorical–there is an implied past and future, especially to these current depictions, typical of all animation." His canvas Little Dancer serves as a striking and enigmatic introduction to his allegorical visions. The scene is apparently set in a church home or orphanage, with various waif-like figures assembled in a living room. Most of these figures are grouped on and around a large, floral couch, like a gallery of Dr. Seuss extras. But one figure stands alone; the “Little Dancer” capers on the red expanse of carpet in an impromptu performance for his fellows.

Looking beyond this central act, we begin to notice details that belie assumptions of communal harmony or happiness. The
Little Dancer figure – dressed in a sort of hospital gown – is painfully thin, with a crazed expression that is poised between elation and terror. Toward the right edge of the composition, one of the “audience” members, gray and emaciated, stares dejectedly at the floor, resigned to some unknown fate. Closer observation yields an ominous, red-clad figure descending the staircase beyond the room, and a red-draped table (an altar?) that beckons – but to whom? For what purpose?

Such details fail to fully encompass the impact of this image. The scene is charged with a strange, complex emotion, heightened by the delightful dread of stumbling upon this situation in medias res. One can hardly help contemplating the previous or subsequent “frames” of this dramatic storyboard. The protagonist of Little Dancer is captured – to the amazement of his comrades – at a boundary, a precarious moment of potential. What remains ambiguous is the allegorical significance of this transgression; an enigmatic sense of dread lingers as we ponder the consequences.

Whereas Little Dancer suggests an autobiographical scene for Rogers – perhaps an episode from his shadowy childhood – Group Self Portrait is a personal manifesto. The title is a provocative contradiction, as our expectations for the genre of selfportraiture predict a single figure. The most obvious reconciliation of this contradiction is that the children and child-like humanoids in the image are projections of the multiplicity of Rogers’ being. This is a self-portrait that employs the artist’s complex arsenal of expressive devices to go well beyond surface appearances into the depths of the psychological.

In Group Self Portrait, Rogers’ affinity for animation comes to the fore in two major respects. First, the “synthesized human expression” employed in the multiple doppelgangers here is conveyed both through their distorted expressions, and through a distinct “color coding” of the figures (e.g. green for decay, purple for consuming evil).

Abundant antecedents again come to mind, including Kabuki theater characters, the grotesque satires of Daumier and Goya, and the crudely emotive figures of German Expressionism, but the synthetic expressiveness of animation remains constant. Second, the allegorical reading of the scene is heightened through manipulation of perspective and the “gravitational ground base” – the visual sense of “right side up.”

Gravity is selectively applied in this space, with some of the figures standing on distinct planes, and other floating around or above them. The black and white tiled “stage,” in particular, gives the scene an air of Alice-in-Wonderland surrealism. Perhaps the only note of stability is provided by the bucolic vignette in the background. It is as if the black backdrop of this theater has been breached, revealing a sunlit meadow beyond. Rogers has noted that this vignette represents a comforting memory from his childhood – when he was allowed to explore the countryside, free, for a time, from the  ominous control of the adults in his life. This is the antithesis of the fractured psyche characterized in the main tableau.

Jonathan Rogers is an artist who, like many a conflicted cartoon character, seems to have an angel on one shoulder and a demon on the other. The existential conversation between the two rewards us with some truly disquieting, but stunning images. They suggest that the self is
characterized by obverse states of potential. They also suggest the excruciating enlightenment
of leaping into the void beyond reason, beyond rational creativity and…falling? Being uplifted? The potential for both is omnipresent in Rogers’ work.