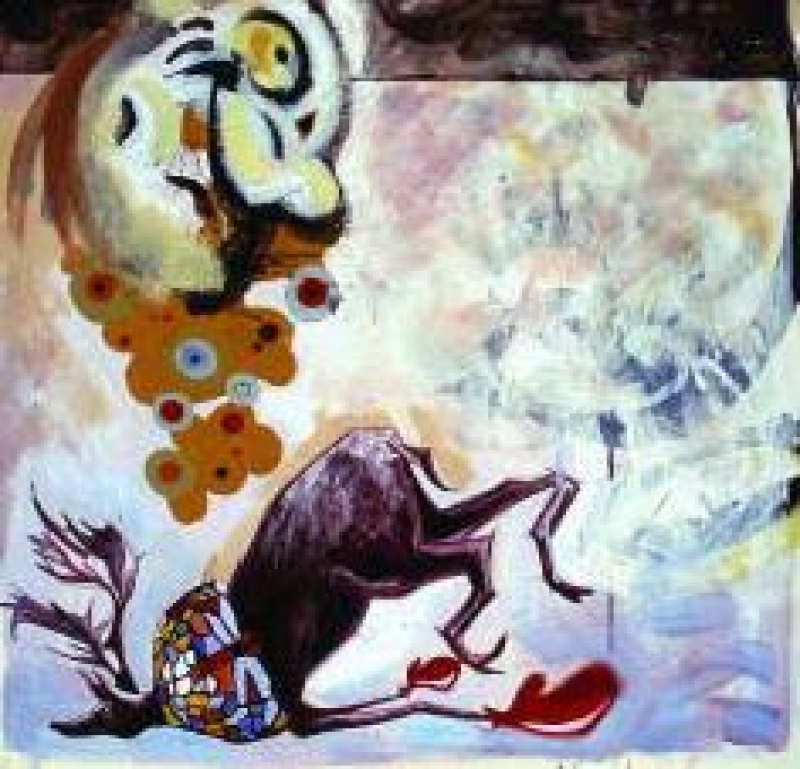 I bring a sketchbook to the cinema.
I drive with a Playskool tape recorder.
I sleep next to a stack of Post-it notes.

I record the strange little enigmas that capture my attention as I go through my days. Those notes become food for paintings that point to an absurd, beautiful existence. I wanted this recent batch of paintings to be filled with a curious mix of delightful highs and heavy lows. I want viewers to chuckle and then stare quietly. I don’t want my works to be preachy. In fact, I’m happiest with a painting when it takes on a life of its own and baffles me. I like to see them over the years and notice my reaction change. I like to gaze at them and wonder, almost like “people watching.”

My decisions as a painter are guided by many quotes that I’ve collected during my education. I always liked Jasper Johns’ idea, “An artist works from rather stupid impulses and then the work is used,” and Robert Rauschenberg’s “If the work can’t be as fresh and as strange as everything that is going on around you, then it is false.”

Robert Lynch’s work in this exhibition took on the unique illustrative qualities of a 1970s young adult encyclopedia, pulp mystery novels, and chic applications of lush color and mark-making. His innate ability to combine a myriad of portraits, figures, colors, and stylized text into surprising narratives elevates this exhibition from a visual display of random images to a celebration of cohesive themes.

Lynch’s serendipitous approach to image making is apparent in his ambiguous juxtapositions of objects, in a search for what he calls, “the mystery of it all.” His sources are primarily culled from endless Google searches that stir his imagination. If the subject of “apple” is searched, he offers as an example, “the expected image of an apple appears but also a string of images titled “apple” appear as well,” leading him from a plump, red apple–to pets and people named Apple–to the Apple computer–to pod watches.”

Even the title of the exhibition, Drink Orange Juice and Hang Out with the Horses, comes from a friend’s internet blog. The title is also a nod to one of Lynch’s mentors, Joseph Piccillo, who told the younger artist that he [Piccillo] chose the horse as his visual mainstay because “he saw a picture of it sitting there, and it just struck him that there was something powerful and odd about it.”

For Lynch, the narrative quality of a work is further obscured or illuminated through captivating titles. Caffeine, Every Morn or I Still Carry You Around conjures up the cultural attaché of daily activities, nostalgia for the past, or other emotions. “I think that the process of choosing titles is a lot like choosing images,” Lynch explains. “You know you need to add something so you keep your eyes and ears open, find lots of options, and go with what feels right. It need not be all too illustrative–just enough to offer a hint.”