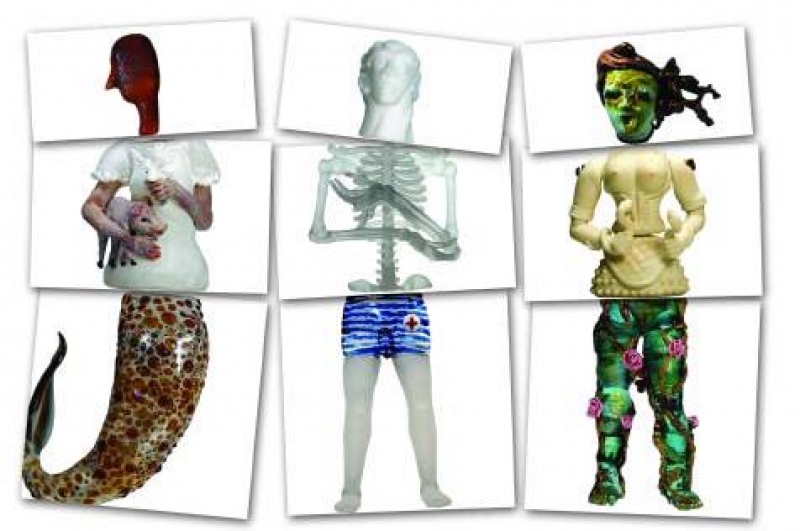 What is the Exquisite Corpse game?

The Exquisite Corpse is a game that was named and popularized by the European Surrealists, who used it as a process for writing and art making. The Surrealists were adherents to a Post-World War I literary and artistic movement that was strongly influenced by the psychoanalytic work of Sigmund Freud and Carl Jung. Founded by André Breton in 1924, the movement sought to interpret the workings of the subconscious mind through the use of fantastic imagery and the incongruous juxtaposition of subject matter that often defies logical, conscious understanding.

The following excerpt contains a description of the exquisite corpse game by William S. Rubin, former Chief Curator of Painting and Sculpture at the Museum of Modern Art, New York, from his book, Dada & Surrealist Art (New York: Harry Abrams, 1968):

“Among Surrealist techniques exploiting the mystique of accident was a kind of collective collage of words or images called the cadavre exquis (exquisite corpse). Based on an old parlor game, it was played by several people, each of whom would write a phrase on a sheet of paper, fold the paper to conceal his part of it, and pass it on to the next player for his contribution. The technique got its name from results obtained in [the] initial playing, “Le cadavre exquis boira le vin nouveau” (The exquisite corpse will drink the young wine…). The game was adapted to the possibilities of drawing, and even collage, by assigning a section of a body to each player, though the Surrealist principle of metaphoric displacement led to images that only vaguely resembled the human form.”

Glass has an inherently seductive quality. The slick brilliance and magical liquidity of the material, of all the artistic mediums shown throughout the world’s museums and galleries, readily commands attention from art connoisseurs and first time visitors alike.

The Exquisite Corpse in Glass: Flameworkers Play a Surrealist Game is an exhibition that brings together cutting edge contemporary glass flameworking and the historic Surrealists’ game—the Exquisite Corpse—originally created in two-dimensional media into a sculptural context. This union was the conceptual initiative of Marshall Hyde, the exhibition curator and a glass artist himself. One thousand copies of this catalogue were printed for The Exquisite Corpse in Glass: Figurative Flameworkers Play a Surrealist Game. Photographic documentation of all objects for the catalog was completed by Marshall Hyde and the design of the catalog was completed by Jim Charlier of JCharlier Communication Design.

The idea for this exhibition came to me while I was working on a collaborative sculpture with my wife, Caitlin Hyde. In this series, which we call Object Studies, we make flame-worked, sculpted glass studies of ancient and historical sculptures, fragments, and artifacts. We then display them together side by side in miniature tableaux, juxtaposing various objects from across time and cultures, the way a rapacious collector might do—and thus amusing ourselves with the narratives these odd combinations invoke.

While working on a Roman torso study, I thought, “Why put this body on display next to one of Caitlin’s sculpted pre-Columbian heads? Why not put the head on the torso for a more amusing and interesting effect?” That notion reminded me of the drawing game my mother played with our family when I was a child, and that game was—the Exquisite Corpse!

I also realized that “the drawing game” could be played instead with glass figures. I also knew a number of very talented and imaginative flameworkers who might be interested in participating. After discussing the concept with Michael Beam, Curator of Exhibitions and Collections at the Castellani Art Museum, I was greeted with his typical enthusiasm: “Let’s do it!” And so we did. That is to say, we all did it together: the brilliant artists, the diligent staff at the Castellani, and the organizations and people who shared their time and resources to bring the idea to fruition. It was a pleasure to work with my fellow artists, many of whom were friends through our involvement with that marvelous teaching resource, the Studio of the Corning Museum of Glass in Corning, New York, and with additional artists whose work I have long admired.

It is our hope that this exhibition will introduce flameworked glass to a wider audience, making people aware of some of the very skilled artists practicing the technique today. I hope it will inspire students of glass making and their teachers to explore the creative possibilities of the process. Finally, I hope that this exhibition will allow everyone to approach art, however one chooses to define it, with a sense of community, a sense of humor, and the idea that anything is possible—anything at all.