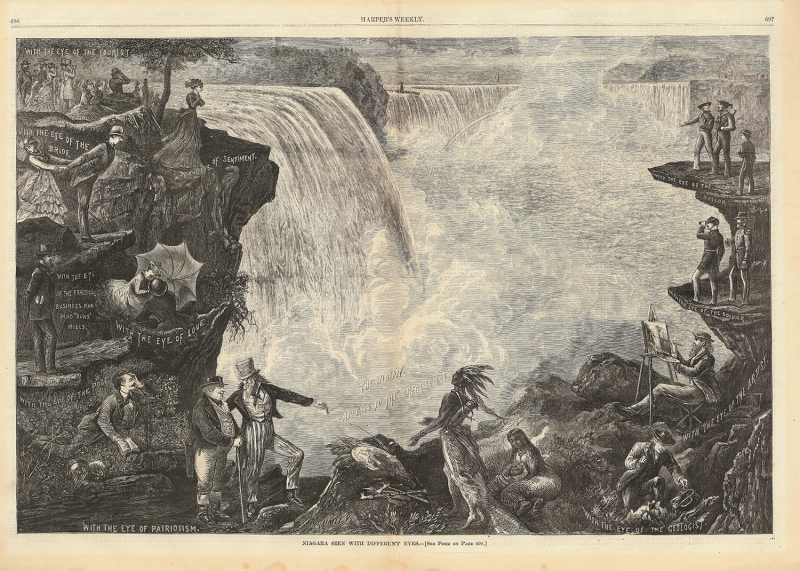 It is believed that more prints were made of Niagara Falls before the twentieth century than of any other specific place, and The Charles Rand Penney Collection of Historical Niagara Falls Prints is the largest collection of this genre. Viewing so many images of one subject together, we can gain new insights not only about the location itself, but also about the manner in which the scene has been depicted, emerging with a deeper understanding of the history of Niagara Falls.

Imagine coming upon Niagara Falls for the very first time in 1678, as the explorer Father Louis Hennepin (Belgian, 1626–1705) did. There were no paved paths, fences, bridges, or observation towers to separate Hennepin from the experience of what he described as “a thundering cataract which has no equal.” With the help of Native American guides, Hennepin was the first European known to have seen the Falls. His vivid written descriptions were later translated by an unknown artist into the first visual image of Niagara Falls—a print that was included in Hennepin’s 1697 book A New Discovery of a Vast Country in America.

Widely circulated throughout Europe, this image inspired other artists to create their own representations of the Falls. Prior to the 1800s, people visited Niagara Falls mainly through printed images and their imaginations, as the Niagara Region was sparsely populated, and travel was difficult. As the nineteenth century progressed, images of the Falls increasingly enticed people to see them in person. Wealthy travelers participated in what became known as the “American Grand Tour”—a trip by horse-drawn coach from New York, up the Hudson River Valley to Saratoga Springs, and then westward to Niagara Falls. Following the War of 1812, a variety of businesses were established in Niagara Falls. The population grew, roads improved, and travel became less expensive. By the late 1820s, many people were earning a living by providing lodging and other amenities for the 12,000 to 15,000 tourists who visited annually.

The Castellani Art Museum of Niagara University acquired The Charles Rand Penney Collection of Historical Niagara Falls Prints in 2006. This collection, a generous donation from Dr. Charles Rand Penney, was partially funded by the Castellani Purchase Fund, with additional funding from Mr. and Mrs. Thomas A. Lytle. Penney felt, as did the staff of the Castellani Art Museum, that the collection, the largest and most significant of its kind, should be kept near the Falls so that visitors from around the world could see and appreciate it. Its more than nine hundred images reflect the historic and cultural changes that have taken place at Niagara Falls since the seventeenth century and illustrate the significance of Niagara Falls to American history.

Penney’s nephew, Christopher W. Lane, co-founder of The Philadelphia Print Shop, organized the collection into seven thematic categories—Hennepin & Derivatives, A Variety of Depictions, Niagara As a Symbol, Popular Prints, Prints for the Wealthy, Extraordinary Events, and Maps. The immense size and fragility of the complete collection precludes a presentation in its entirety. The Lure of Niagara: Highlights from the Charles Rand Penney Historical Niagara Falls Print Collection features works, representative of the larger holdings of the collection, that are symbolic, commercially popular, historically relevant, and particularly unique.

A native of Buffalo, New York, Dr. Charles Rand Penney (1923–2010) made his life and career in Western New York, working first as a lawyer and later pursuing a lifelong love of collecting and lecturing about art and antiques around the world. In 1995, he was honored with a Doctorate of Fine Arts from The State University of New York at Buffalo State for his contributions to the arts, especially in Western New York. In 1999, he received the Red Jacket Award from the Buffalo History Museum for his commitment to raising awareness of the shared heritage of Western New York.

Whether traveling to Papua, New Guinea, or up the Niagara River to Olcott Beach, Penney built a collection that signified his approach to learning about new people and places, which eventually grew to include more than one hundred different themes. In the early 1990s, he donated a collection of Western New York art to the Burchfield Art Center at Buffalo State College, resulting in the renaming of the Center to the Burchfield Penney Art Center. In 2008, he donated his entire collection of Niagara County art, artifacts, and research materials to the History Center at the Niagara County Historical Society, located in Lockport, New York, resulting in the opening of the eponymous Penney Gallery. During his lifetime, his collections occupied an entire floor in the Bewley Building in Lockport. Penney regularly loaned works from his collections to institutions throughout Western New York and across the globe.

The Charles Rand Penney Trail, established in 2012, connects collections that were either donated by Penney or purchased from his estate and now reside in diverse institutions across New York State’s Niagara and Erie Counties. These institutions include The Niagara County Historical Society, The Buffalo History Museum, the Theodore Roosevelt Inaugural Site, the Buffalo Museum of Science, the Castellani Art Museum of Niagara University, the E. H. Butler Library, The State University of New York at Buffalo State, and the Burchfield Penney Art Center. In total, the collection represents the depth and breadth of art, artifacts, and ephemera assembled by one of the great American collectors of the twentieth century. These museums and cultural institutions have brought Penney’s diverse interests together once again through the Charles Rand Penney Trail—New York Heritage Digital Collections.